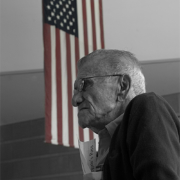 Although many people liked the James image, almost as many like the image of the older man with the flag in the background. Well that old man, he was my father.

Although he passed away this year at age 84, I look at the image often and I wonder what I could have done better. Of course I am my own critic and I do that with a lot of images. This image though for obvious reasons gets a gander a bit more often.

As my father was very much the ‘Navy Man’ I often wonder what I could do to make that subtle reference pop out more. After all, If you ever met my father and let him talk, and trust me it was hard to stop him from doing that! He would have let you know rather quickly that he was in the Navy.

To make the image  pop I decided to add a little selective color.

In the quick tutorial below I decided that I should add some color to the image. Seeing the flag is the strongest part of the image other than my father’s profile I thought that perhaps I should give Old Glory just a bit of punch. Click on the video to view how I did it.

Because I know many of you are going to ask here is the final result.

And for those that want to know something else about him; no he wasn’t a photographer. Not formally, but in his last years he went around the nursing home with a Polaroid in his hands all the time. I guess I come by it naturally.

Until next time,
Happy Shooting!