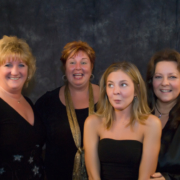 Once you have chosen a camera and you start shooting, over time you are going to build a body of work. Now that most images are digital we don’t tend to pull out old albums or boxes of pictures like we used to. When I was a kid my sister or I would see an album under the side tables by the sofa and one of us would pull out the album. Our parents would sit next to us and point out how cute we were when we were still in a diaper or worse, when we had been photographed naked as a baby. No bear skin rugs at my house…

Now that everything is digital, the box or album of pictures isn’t under the table or in the drawer anymore. Now they are on our computers (and hopefully backed up somewhere). So what do we do to encourage ourselves to pull those images out and look at them?

Instead of leaving my images on my computer or in my backups, I try to make something of them. Recently I had to do a presentation to a company looking for portraits of everyone that worked there. So I put together a little movie of some of the portraits I have taken over the last couple of years. Take a look.

Also I have printed many of my images and turned my home into a gallery of my work. Other than in my girlfriend’s office, there is only one image on my walls that isn’t mine. That is a painting that my mother did.

There are plenty of software packages out there that help you make slide shows, movies, holiday cards or just about anything else you can think of that uses an image. For PC users there is Windows Movie Maker, for Mac users, iLife and its array of tools. There are professional programs and websites that will help too. I use ProShow Producer by Photodex.com but at animoto.com you can upload images and the software does everything for, you including adding royalty free music!

So not matter how may images you have, pull them out of that old computer and make a movie out of them! Who knows, you may create the next viral video for YouTube.com!

Go with the Feeling
Scroll to top