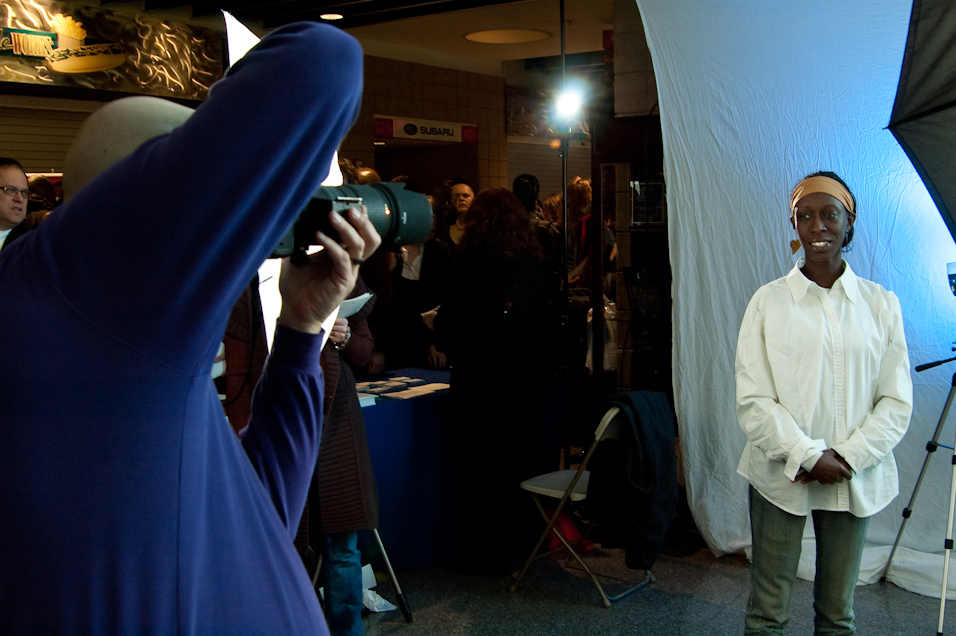 Well if you haven’t heard yet on January 28th I did Free Business Portraits for the Unemployed again. Each time I set up an event I try to have a different team with me. The idea is that I want let more people know about others and the challenges the unemployed person faces.

This time my team consisted of Theresa Rivers, Sol Levy, Annie Nason, Susan Schroeder and Linda Slodki. All were of great help and you can see us working together in my previous post Joblessness in the LA Times and the video in that post. Linda felt the need to say more about the event so for the first time ever below is a “Guest Blog” entry.

You Need A Helping Hand In These Tough Job-Hunting Times

It’s 2010. It’s still double digit unemployment. It can be really tough putting your best face forward. You have your suit, you have your resume, you have your “elevator pitch.” But how do you show a prospective employer that you are computer savvy and help them navigate the web? One way to do that is have your digital business photo displayed on LinkedIn, Facebook, or other social media sites. Getting that photo done by a professional can be expensive—hard to afford when you’re unemployed. That’s where Michael Albany steps in. He extends a helping hand by shooting professional shots of jobseekers—free of charge.

Why would Michael extend his services at Job Fairs (this is not his first time)? Pure and simple—he sees it as a community service. He knows what it’s like to be unemployed; he knows what it takes to sell yourself. He knows how it can feel, when you go to a Job Fair flooded with applicants, feeling that, just maybe, you could have done more to sell yourself. That’s why he gives back…you leave with another tool that may help you land that job you’ve been seeking. And you get a professional photo at no charge to you. I’ve seen the photos, you all look great! 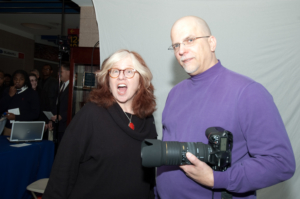 I had the privilege of assisting Michael at the “Jobs Gone Wild” Career Fair on Jan. 28 at the Wachovia Center in Philadelphia. They were expecting 2,000 participants. Instead they got 6,400! As soon as the doors opened at 10 am, we had a line down the corridor which continued all day. Many folks waited 1½ hours for their photo session, but Michael had it covered. Every person had the experience of a professional “photo shoot.” He thanked everyone for their time and patience, and then he proceeded to get them relaxed and prepped—smiles, laughter, and confidence only.

Did I mention his extra added bonus? He brought a makeup artist! Here was this line, stretching as far as my eyes could see, lasting all day long, with crowds of jobseekers pushing them tight up against the wall. After the long wait, as they arrived at the photo shoot area, both men and women were seated in chairs and treated to hair styles, makeup, and some serious pampering. I watched as smiles spread across their faces—they were freshened up and even had wrinkles removed from their clothing. They were ready! I heard one woman say she couldn’t believe that someone was going to do this for her at a Jobs Fair. She said, with confidence, that she had come to that event, and left with something that would clearly benefit her. Michael Albany was really there for her, for everyone.

The Career Fair lasted until 2:30 pm. Although Michael had worked continuously, there were still 60 people waiting. The disappointment in their voices weighed heavily on us all. So, Michael had one of his assistants take photos of those folks while he continued to capture images of as many as possible. He got every last person’s email, promising to let them know of his next Job Fair and giving them the option of being first on line.

At the end of the day, we were all exhausted. But, you know what? Having someone who offers you a helping hand has value, keeps you going, and keeps you motivated to do whatever it takes to find a job. It reaffirms your faith in what is possible.

Thanks Michael, for all that you do.

Joblessness in the LA Times

One Handed Photoshop – Make The Image Pop!
Scroll to top