To all my readers and followers, I owe you. You see before May of 2014 I was posting on this blog pretty regularly. From May through December I was strangely quiet; as many of you know that in and of itself is very strange. I am rarely quiet. You read this blog to see images […]

As I mentioned in my last article “OMG What a Month” I was also in NY last month working on a calendar project for a non-profit. I said I would write about it when the calendar came out. Well, it’s out and you can order your copy here; The Calendar Project!

There were a number of us involved in the project, 3 photographers, two art directors, many assistants and 20 or so models. It was a large project and we all think it came out really well. I wasn’t the only photographer on the project but as it turned out I did end up getting 6 images into the calendar, only two of which are posted here. In addition to having my images in the final calendar I also did the editing for all the images and I hope I did well by all the photographers.

This was a huge project for the small amount of time it took to go from concept to an actually printed piece. The efforts of the crew and everyone involved is what made it happen. Everyone volunteered for this and no one is getting paid in any way which makes it even more amazing. Even scheduling was a huge task due to everyone having their regular schedules to deal with and everyone made amazing sacrifices to pull it all together. As the only full time professional involved I think I had it easiest as my schedule is made up of this kind of thing all the time. 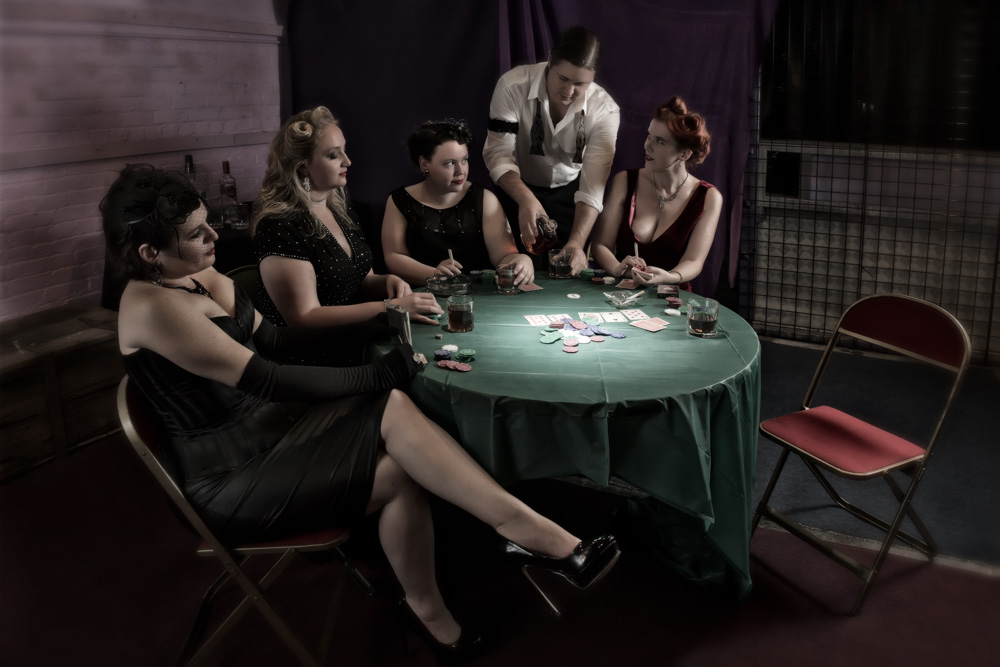 Everyone is hoping to get all the calendars sold by December 1st and they are about 50% sold now. This is a very limited printing and if you want a copy, you better hurry! You don’t want to miss this pinup inspired calendar. All the images are different but all have a retro feel. Some of the images are titled;

The Greaser
Singing in the Rain
Champagne Toast
The Rosie Riveters

Again, to get yours go to The Calendar Project and order now before they are gone!

As I wrote in my last post “Excitement!” I very much enjoy the images from old Hollywood. The variations, the light, the dramatic looks all lend themselves to the mystery of photography that grabbed me so long ago. The more I see of it the more I want to see and shoot! I can’t get enough of these images. I wonder what they would look like in color, what would the photographer of the 1940s do with the equipment available today, how would these old masters capture the personalities of today?

As a photographer myself I can wonder or I can give it a shot (har har). Today’s celebrities very much fit a certain look and are within the elite of a certain type. Back in the golden years of Hollywood a broader sense of beauty was the norm. By today’s standards actresses such as Joan Crawford, Jean Harlow and Barbara Stanwick would not fit into the “stunning good looks” category but I defy you to say these women were not considered some of the most beautiful women of the age.

In order to try to figure out what the old masters would have shot I needed to find women that don’t consider themselves beautiful; actually they are more than just pretty, they are strong, wonderful everyday women and that in and of itself makes them beautiful.

A while back I started planning this photoshoot when I ran into a friend I haven’t seen in almost 10 years. Lisa and I ran into each other when I was photographing an apartment complex she was just moving into. It was great to see her and within minutes we decided to do a shoot together. It just blossomed from there! I invited my new neighbor to join us; she is an acting student at a local university and a tall statuesque blonde with amazing eyes that penetrate you to the core.

The shoot preparation was coming along well and I had no plans to add another model. One day my wife and I stopped by a restaurant after picking up some things at Target near our home. As our server came to our table I saw something that got my attention. “Uh Oh” was the look in my wife’s eye. “Here we go again.”

Although she is rather used to me pulling out a business card and asking someone if they would like to model for me I know it isn’t her favorite conversation to have over a meal. In her defense she does help me too by telling the person that, “No he isn’t a weirdo, he is really a professional photographer.” I honestly think this puts many people at ease and actually lets them consider the idea.

I told our server, Allie, about the shoot I had planned and that if she was interested to give contact me. I was very pleased when I heard from her shortly thereafter. She thought the whole thing would be fun. She was right: it was a blast!

I’ll never really know whether the old masters would have shot these three amazing women in the same way I did but I can tell you that these three everyday women became the Hollywood Stars I knew was a part of them. I’ll let you click through the images below and you tell me who is the Actress, the Mom, and the food service Server.

Who are you hiding inside? Bette Davis, Jane Russell, Katherine Hepburn, or maybe you have a little Mae West in there. Here’s my card, let me know if you want to find out. It will be fun! Just ask Allie.